All dialogue segments within a game that refer to the same target image form its reference chain. In order to automatically segment the collected dialogues in this way, we developed a rule-based heuristics exploiting participants’ image labelling actions to detect segment boundaries and their respective targets.

Due to the spontaneous and unrestricted nature of the PhotoBook dialogues, participant labelling actions do not always indicate segment boundaries as cleanly as possible. To improve the quality of extracted dialogue segments and reference chains, we therefore developed a more context-sensitive heuristics to automate segmentation. The heuristics is implemented as a binary decision tree that uses labelling actions as well as any preceding and subsequent messages and additional labelling actions to better decide on segment boundaries and associated target images. It considers 32 combinations of eight different factors. The first case of the heuristics, for example, states that if
then we assume that after one speaker selected an image as common, the other speaker makes one utterance and marks the same image as common, which is resolved by saving the currently developing segment with the common image as referent and initialising a new segment with the trailing utterance of the second speaker. This prevents creating a segment with just the trailing utterance (that cannot be a complete segment) which would be the naive decision if segmenting was based solely on labelling actions. Other cases include whether the next turn is a message by the other participant followed by them labelling a second image as different (likely to indicate that two images were discussed and the segment should be extended by the following message as well as the second target image) or whether none of the preceding and subsequent turns contains labelling actions (indicating an ongoing dialogue segment).

The full heuristics can be viewed here.

The files necessary to replicate the automatic extraction of segment chains can be downloaded from github here, or as a zipped archive here. To execute the files, place the log folder into the project's data folder. Further documentation can be found here.

The following shows a typical example of an automatically extracted chain of dialogue segments associated with the following image: 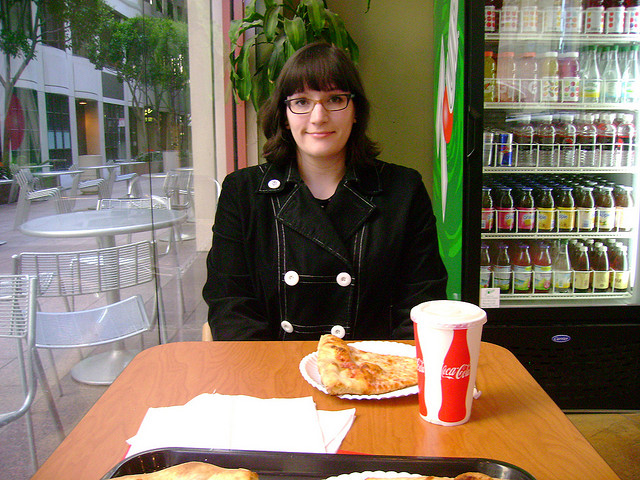 B: Hello
A: Hi
A: Do you have a woman with a black coat with buttons, glasses and a piece of pizza on table
B: no
A: Lady with black shirt, glasses with pizza on table?
B: yes
A: Table with orange bowl with lemons and liquor, cups?
B: no
A: Orange bowl with lemons, liquor?
B: lady pizza
A: No lady pizza
B: yes
B: woman and pizza
A: Empty kitchen wood coloured cabinets?
A: No woman pizza
B: no

72% of the extracted segments are linked to only one target; 25% to two. Moreover, reference chains do not necessarily contain one segment for each of the five game rounds. They may contain fewer or more segments than rounds in a game, since participants may discuss the same image more than once in a single round and some of the extracted chains may be noisy, as explained in the evaluation section below. 75% of the automatically extracted chains contain three to six segments.

To evaluate the segmentation, two annotators independently reviewed segments extracted from 20 dialogues. These segments were annotated by marking all utterances u in a segment S with target images I that refer to an image i0 where i0 ∈ I to determine precision, and marking all directly preceding and succeeding utterances u0 outside of a segment S that refer to a target image i ∈ I to determine recall. Additionally, if a segment S did not include any references to any of its target images I, it was labelled as improper. 95% of annotated segments were assessed to be proper (Cohen’s κ of 0.87), with 28.4% of segments containing non-target references besides target references (Cohen’s κ of 0.97). Recall across all reviewed segments is 99% (Cohen’s κ of 0.93).

The automatically extracted co-reference chains per target image were split into three disjoint sets for training (70%), validation (15%) and testing (15%), aiming at an equal distribution of target image domains in all three sets. The raw numbers per data split are shown in the following table: